The right cure knows no boundaries

At 13 years of age, my younger brother underwent surgery for pleomorphic adenomas on the left parotid gland. My family and I reside in a small town in Maharashtra. One day, when he was back from school, my mother noticed an abnormal growth under my brother’s left ear. Not being able to make much of it, I suggested we visit a doctor to find out the problem. The next day, we met with the general physician in our neighbourhood. After examination, he explained to us that the bump was probably some kind of small tumour, and it needed to be removed through surgery. We were very uncomfortable with the idea of surgery, given my brother’s young age. We decided against it, assuming that the growth would subside over time. Two and a half years went by.

However, much to our dismay, in that time the bump had increased and became alarmingly large so that we could no longer avoid treating it. Even if that meant my brother undergoing surgery. We now had to look for a good ENT specialist who could undertake the surgery. I began my search online and stumbled upon Practo. I downloaded the app on my phone and was able to identify 3-4 good ENT doctors who seemed well qualified. Their profiles showcased some valuable feedback from other patients and good ratings. I booked individual appointments with these specialists and went to consult each one of them with my brother. Some were even based in other cities, including Dr. Shareef. I visited Dr. Shareef in Hyderabad at his clinic and found him to be kind-hearted and attentive. Interestingly, while other doctors kept stressing that the growth may be a facial nerve injury, Dr. Shareef displayed confidence in the diagnosis. My brother felt comfortable being around him during the medical examination. He informed us that it was a non-malignant tumour, which would have to be removed with surgery.

It was the festive season at the time and most pathology labs in the city were closed. Dr. Shareef was kind enough to help me find a lab that was open and even put in a word for us. The treatment took about 20 days and my brother came out perfectly healthy after a smooth surgery. I must say, I am very glad to have made the journey to Hyderabad and met Dr. Shareef. I wholly attribute my brother’s good health to him and would definitely recommend him to anyone with a similar medical problem.

Finally, I would like to add that I found it very useful to read up on the testimonials and reviews by patients on the doctors, found on the app. While a doctor’s qualifications are important, it is crucial to undergo treatment with a doctor who is empathetic and a good human being. It makes a world of difference to a patient and his family. I urge everyone to use Practo’s services as with Practo you can get appointments and look up doctors at the click of a button! 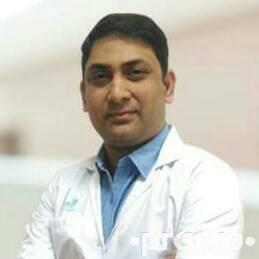